How We Create A Career: Baker

Natasha Kuczynska is the owner and baker behind What the Cake? a business specializing in custom, natural, fondant-covered cakes. From a long line of bakers, Natasha began making cakes as a child, but only started selling them after her friends – impressed with her homemade creations – urged her to launch a business. Her first custom cake, commissioned for a friend’s bachelorette, is too risqué to be displayed on this website.

I met with Natasha in her kitchen last week to watch her make her annual gingerbread angels, from a 100-year-old recipe. Here she describes the value of building a business gradually, the importance of choosing happiness in one’s career, and the magic of baking in the early morning.

Natasha grew up around sugar. Her parents and grandmother worked in a sugar factory, which meant that at the end of each year they came home with a giant bag. Consequently, despite growing up in 1980s Poland, where “there was nothing on the shelves except for vinegar. You had to stand in line for toilet paper. You had to sign up and wait for 3 years to get a car – even if you had the money,” in Natasha’s house, “maybe there weren’t the fanciest clothes or the coolest toys, but there was always sugar” to make cookies and cakes.

Her grandmother, in particular, was a passionate baker, and Natasha learned at a very young age how to bake intuitively, by helping at her side. “She was rolling things out constantly. Stirring something on the stove, constantly. There were always stories, and there were always recipes. Back in the day I was scratching my little head, thinking, why is she telling me: ‘It’s a half a cup of sugar. Touch it – you will know what the consistency of the dough should be.’ I was 5. I did it because I wanted to be with my grandma. But looking back now, I have all those recipes in my head from childhood.”

As a child and teenager, though, Natasha wanted to be an actress, a writer, and a singer. After a brief stint as the frontwoman for a punk band – The Morn – which got a song on Polish radio for 24 hours, before the DJs realized what the lyrics were – she decided to pursue her fascination with language by teaching ESL. Reasoning that the best way to become an effective ESL teacher was to immerse yourself in the language, she shipped off to the U.S., promptly fell in love, and decided to put down roots.

To pay the bills, she picked up a “boring office job” at a design firm. Although her primary tasks involved updating the website, picking up lunches, and taking out the trash, she longed to be a part of the creative work that was unfolding under her nose day after day. “I saw so much creativity that I wasn’t a part of because I wasn’t the designer. I was the admin girl. And I felt like everybody else was doing something really cool and creative with their life, and here I was just pushing papers and three hole punching things and fixing the fax machine. I felt so stuck, and I knew that that job was not getting me anywhere. I liked myself less and less.” 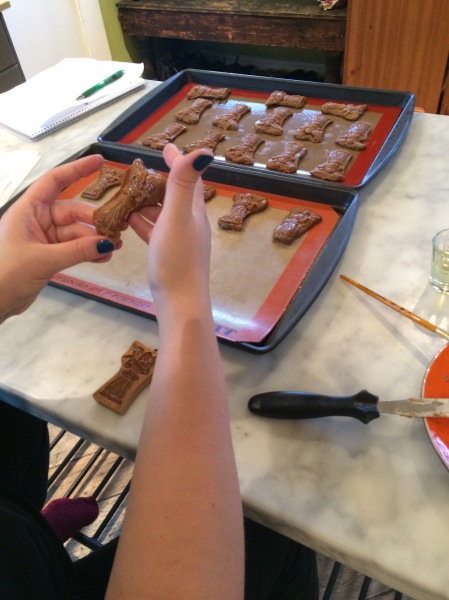 Around the same time, Natasha started baking cakes. Her friends, impressed with her creations, urged her to try to sell them. She ramped up the business slowly, working part time to expand her skills (for example teaching cake decorating and making lattes – two activities she would like to be a part of her own brick and mortar shop one day) and taking workshops for small business owners (for example, at Women’s Initiative). Then she found out she was pregnant. Sensing that it would be too much to juggle making cakes, working part time, and raising her daughter, she realized she would have to sacrifice either the part-time work or the cakes. She ultimately chose baking because she wanted to model the importance of prioritizing happiness to her daughter.

“My whole family used to work in sugar factories in Poland – that’s just what you did. And God knows, maybe I would be too if the political structure in Poland hadn’t changed right around the time that I was a little girl and the sugar factory shut down. I saw my parents struggle and try to make a living taking all sorts of jobs. And I remember being a teenager and coming home and not being able to crack a smile. I don’t blame them – they did what they had to do to kind of make ends meet. I just want it better for my daughter. I want her to see that especially as a woman coming to another country, it doesn’t matter how much you have going against you. You can succeed and be happy. I could have gotten another office job. I could have put her in daycare. I could have said, ‘you know what, that’s enough of cakes for me! Because I need to be a responsible adult now, instead of making Chewbacca cakes.’ But I don’t want her to look back in 20 years and think, ‘why did you walk away from that?’ I want her to see that the most important goal in our life is happiness.”

Natasha’s cakes are completely custom – down to the cake flavor, buttercream, and shape. “If someone comes to me and says, ‘I need it to be funfetti, and I want it to have a peanut butter buttercream can you do that?’ I say, ‘sure!’ I don’t use mixes, so I need to create one from scratch. I sit in the kitchen and I try to figure it out. And then if they say, ‘I want it to be shaped like Chewbacca.’ I can do that. I’m your gal!”

What she loves about baking is threefold. First, it affords her the time by herself that she craves. “I am an outgoing person, but I need time to recharge and be alone. This helps me, because I do it at night, when everybody else is asleep. I get to listen to my music, or I get to be quiet, and I am just in my head.”

At the same time, baking connects her with other people – not just through her contributions to their celebrations over the years, but also by inducting her into the secret society of bakers who are up working in the early hours of the morning. “When I was in college, even if my classes started at noon, I would wake up at 5. I would make myself a cup of coffee, a little breakfast, and I would open my shutters and look at the trucks delivering bread to the stores. It’s a magical thing to me, that there is a whole bunch of people out there that worked the entire night to contribute to what is other people’s morning ritual. When I started renting space at a commercial kitchen and the cheapest and most available space was between midnight and 3, I didn’t mind. I actually felt like all of a sudden I became part of a club. I’m that person that bakes at night when everybody else is asleep. I’m awake, and I’m mixing. It’s kind of awesome.”

Lastly, she appreciates the creative element of baking. “I love the magic of putting just simple ingredients together and turning it into something amazing.”

Her dream is to open her own shop – a place where people can gather over coffee and she can teach baking and cake decorating, as well as sell her fondant cakes and the old world cookies and cakes she grew up with.

Despite this passion, however, Natasha is not without her doubts. “I think it’s reckless not to have doubts. You can say that you don’t have doubts, you can try to work yourself up to be a little braver than you maybe normally are, but I think it’s natural to have doubts. It’s human and actually it’s a good thing.”

Aside from relying on a glass of wine and a good cry, she copes with these doubts by trying to regain perspective – whether by spending time with friends, embarking on a road trip with her family, or diving in the ocean.

Connecting with the joy that her work brings to other people also helps. “When I have doubts, I go back to those emails I get from my clients. They send me pictures of their kids getting all messy with the cake, or a little story about how it took their birthday celebration to the next level.

Earlier this year I had an order for a waste management cake. It was for a 2-year-old boy who loves trash day. Every Tuesday he wakes up super early so he can be at the window or at the door, watching the truck picking up trash. So his parents ordered him a waste management cake. I got an email the next day saying that they had to take turns watching the fridge, because the boy wanted to play with the cake so badly that they were afraid that the cake wouldn’t make it to the party. Then there are the princess doll cakes where by the time it’s time to cut the cake, the girls already gave the cake a name, and they’re friends, and they don’t want to use the knife…it’s cute.”

In general, Natasha advises those interested in setting out on their own to pace themselves. “I’ve heard so many people say, ‘Just go for it! Just jump!’ Don’t jump! If you’re that scared. If you’re kind of scared, you know, change obviously doesn’t happen in your comfort zone, but do it gradually. I did it gradually. I’m still doing it gradually, because I still don’t do it full time, I have a child, and I’m trying to figure out how I’m going to open a brick and mortar. Rome wasn’t built in a day – pace yourself.”

She also recommends networking and doing research. “There are plenty of networking possibilities, and some of them are not even marketed as such. For a lot of them you don’t have to pay, but just go and be there with people, and talk to them. Even after a workshop like that, people stand up, they exchange their cards, they start talking about things. You always meet someone. And that’s great. Surround yourself with women that also want to be or feel empowered.”

Thank you, Natasha, for sharing your story and allowing me behind the scenes of the making of one of my favorite cookies! Your passion about your work, steady dedication to building your business, and strong conviction in your ideals is an important reminder for anyone seeking to start their own business from scratch, and an inspiration. I really hope you are able to open your own shop one day – more people deserve to have access to your delicious treats!

Natasha’s angels (which double as beautiful ornaments) can be ordered for $15 a dozen, or $10 for a half dozen, through Dec. 15. Contact Natasha at natasha@whatthecake.com to order.

For more interviews with women who are forging their own paths, career and otherwise: Follow me on twitter @shespoised or like She’s Poised on Facebook (and select Get Notifications from the drop down menu).

Tagged as: Gingerbread, How We Create A Career