How We Raise A Family: Allison

Next in our series on pregnancy, birth, and motherhood is Allison. Allison has built an award-winning career as a graphic designer and art director. Over the past 16 years, she has amassed extensive experience both in magazine publishing and marketing for retail, directing location shoots, editing, and styling for clients such as Gymboree, The Men’s Wearhouse, and Sephora. She had her first child at 38. Here she talks about being an older mom, balancing parenting and career, and gaining a new sense of priority.

How do you think motherhood was different for you compared with women who had children at a younger age? Did you face any unique challenges?

You definitely face challenges. For me, it wasn’t easy to conceive. Everyone has their own path for that. Some people get pregnant immediately. Even if they’re old. And then other people could be 22 and struggle. So that’s not really an age thing. But it did take a while. And then the older you are, the harder your pregnancy is going to be. If you’re 10 years older than your friends were when they had kids, you just don’t have as much energy. But, because your friends have all gone through it, you can get all their hand-me-downs. All their advice. So that part’s awesome.

How was the birthing process different from what you expected?

I think the key thing about the birthing experience is to not have any expectations. Because you cannot predict anything. It’s the one thing in your life you really can’t plan for. Unless you’re having a scheduled c-section, you don’t know when it’s going to happen. Or how.

My older child was born in a posterior position (facing up). He also had his head tilted a little bit. But no real complications except that it was a long period of active labor.

The second birth was very very different. It happened three weeks early, so it was unexpected and my husband was out of town. I took my son out to do a fun Labor Day Weekend day. It was the hottest day of the year and we were walking around all day. I didn’t realize that I was in labor. I was experiencing discomfort, but it was not much different from the discomfort you experience when the baby is just moving around. I didn’t put two and two together, because it was 3 weeks early. But when I look back on it, I realize – the pain was in these intervals of  every 2 hours, every 1 hour.

At about 4 in the morning, I woke up, because I thought I had peed in the bed. But the placenta had come off the uterine wall. And it caused a bloody mess. I kept my cool as much as I could. Called my doctor immediately. Called the doula. Called my husband. Called a friend of mine who was the backup to the backup. My parents were going to be in town, but obviously they weren’t there. My friend didn’t answer her phone, so ultimately I called an ambulance. Then I started feeling serious labor pains. It was maybe an hour and a half later that Hadley was born. So it was very fast. I think that’s a good example. It’s still me, but a completely different situation. You can’t plan for it. It’s not going to go the way you think it’s going to go. 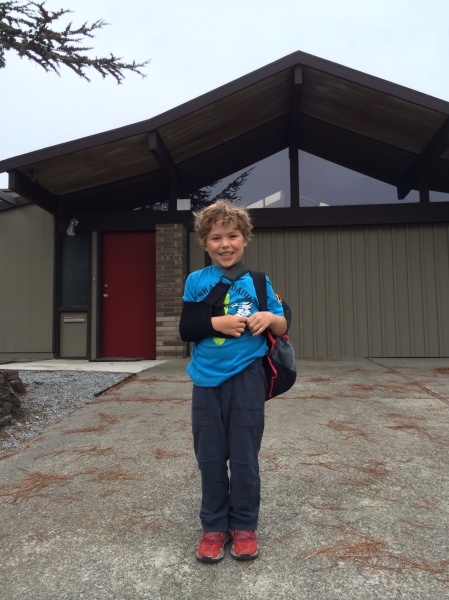 What helped you during labor? How did you deal with the pain?

It’s kind of a blur. One of the funny things about the birthing process is that once you’ve had some time, you don’t remember a lot of it. On purpose.

It definitely helps to have a support system. I think what got me through was the doctors and the nurses and my partner and doula telling me how much progress I was making. They’d say things like however many centimeters I was dilated. Or that they could see the crowning.  They were constantly filling me in on my progress. So I always felt like it was only a little bit more. Also I remember my doula asked me what kind of scents I liked, and I mentioned lavender. So she had a lot of lavender. That was very soothing.

I think a problem with the first birth was that the birthing professionals would say something like ‘you should start pushing when you feel the urge to push.’ But I didn’t really know what that felt like. I thought to myself, ‘it’s painful, I want to push.’ That’s what I thought they were talking about. But that was not what they were talking about. And I think that’s why it took me so long. Now I know, from the second time, what that really felt like. It’s kind of an involuntary feeling, like a reflex. You can’t not push with it. That’s what it felt like when I had my daughter. That’s when I first felt it. I thought to myself, ‘oh that’s the urge to push. Now I know what you guys are talking about.’ I don’t think I would have had to push so much the first time, had I known. I would’ve just waited for the contractions to pick up.

What do you wish you had known before you got pregnant with your first child?

Well, there are a couple things I was glad I found out about when I did. One of them was Priscilla Dunston, who did a lot of research on babies’ crying, and found out that there are distinct cries that mean ‘I’m tired,’ ‘I’m hungry,’ ‘I’m uncomfortable.’ It’s only effective for the first 3-5 months of the baby’s life. And then their cries change. But those first 3-5 months are so key for a new parent, because you’re constantly freaking out about why your baby’s crying. Especially in the middle of the night. If you watch the video and learn these distinct cries, and then learn what your baby is saying, it is so comforting to actually know what the problem is instantly, instead of trying five different things.

I think another key thing that people say which is really true, is that there is so much baby crap out there. Swingy chairs, bassinets… it’s overwhelming. But there is very little that you actually need. The best way to go about it is to not buy anything until you need it. If you get it handed down to you, that’s great. But you don’t know what your baby is going to like. Some babies like those swingy chairs. Other babies like little bouncy things. Others only want to be held all day long. And you aren’t going to know until you try it. If you don’t get it from a friend, you can buy it on craigslist or there are tons of resale shops where you can get it for dirt cheap. You can try it that way, and then you put it back out there for resale. That’s the best way to do it. 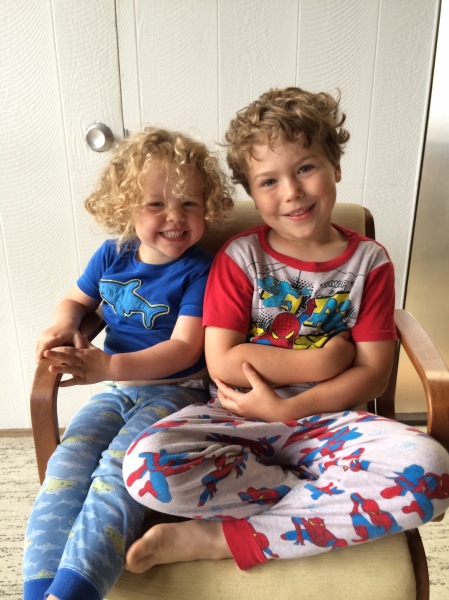 Are there any other books or resources you recommend?

The Happiest Baby on the Block. That’s a really popular one that we found to be very true, very effective. Ina May Gaskin’s books. In one of her books in particular, there were a lot of birthing stories, and I found it really helpful to hear everybody’s stories because they’re so different and you can see the range of what people go through. I also read a lot about fertility and the different signs of where you are in a your cycle. I found it really fascinating.

How do you juggle raising two kids with your career?

This is the ultimate question. It hasn’t changed that radically, because I’m still doing what I was before. I would say that the major thing that has changed is that I can’t and I don’t want to put in overtime. Before I had kids, I would not hesitate staying late at work. 7-7:30 was not a big deal to me. But now it’s not very practical for me. I feel that there are definitely women who have a different focus or style or manage their lives differently, and can do this. But I’ve decided that for me I only want to do a 9-5 schedule. And I don’t like to work weekends.

Before my current situation, the job that I had required a lot of overtime. And it was too much. It was draining. Working 60 hour weeks just was not practical for me. So I quit. Now it’s much more manageable. 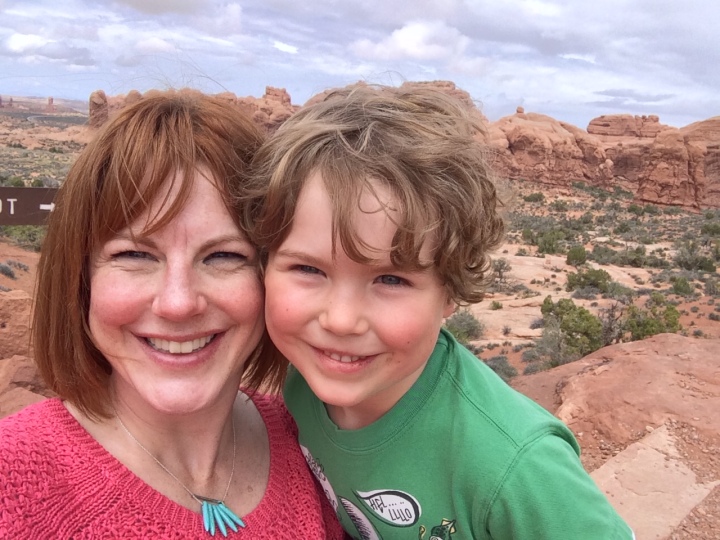 What do you love most about being a mom?

Being able to see the world through the eyes of a child on a daily basis. There is so much innocence there. So much joy at simple things. Everything that they come into contact with is for the first time. So you’re really experiencing that again through them. And I think that’s really thrilling. Because, I don’t remember being 3. So you get to see it again. And you see their eyes light up, and their excitement. It’s really a really precious time.

What about motherhood has surprised you most?

When you don’t have kids, you have the ultimate freedom. You can be spontaneous. You have responsibilities in some sense, but in others you don’t. Once you have kids, your life completely changes. For a lot of people that’s a very scary thing. Because they love that feeling of ‘I can just go to the movies!’ Or, ‘I can drink! I don’t have to worry about babysitters!’ I definitely felt like that too. I lived in New York, I had a great time there. But then, once you have kids, your whole life kind of turns on its side. And none of that other stuff matters anymore. Your focus completely changes. But you don’t even care! You have a new reason for being. 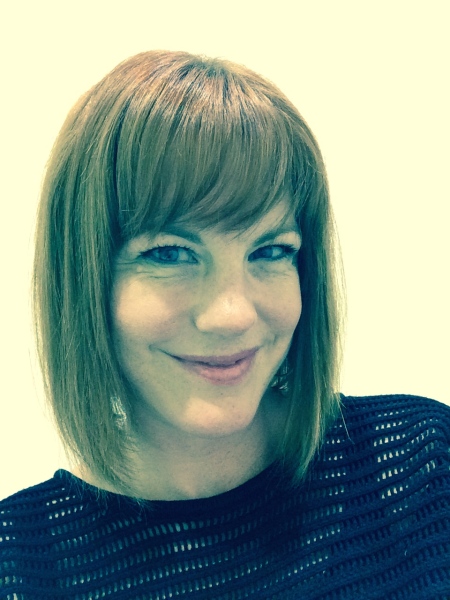 Thank you, Allison, for your practical advice and frank insight into the experience of being a working mom. Your perspective is reassuring, your career inspiring, and your children ridiculously adorable! They are lucky to have you as a role model, and so are we!

Tagged as: Poised for Motherhood