On Sunday we walked past Circo Massimo to the neighboring market–supposedly one of the best in the city–but (as it turns out) open every day except for Sundays in July. When we got home, the toilet clogged and then flooded all over the bathroom floor.

We took the metro to a gelateria that we discovered no longer existed in that location, and, on the metro, the entry gate closed as I was walking through it. Finally, turning the corner to Trevi Fountain, we learned that it had been drained for construction.

So, instead, I’m going to tell you about Saturday.

Because many shops and restaurants in Rome close on Sundays (see above) and because I love grocery shopping abroad, we headed straight to a deli to stock up for the next day. There is a Torvehallerne-style market in the neighborhood where we’re staying (Testaccio) that piqued our interest, but I enjoyed even more shopping at Volpetti. 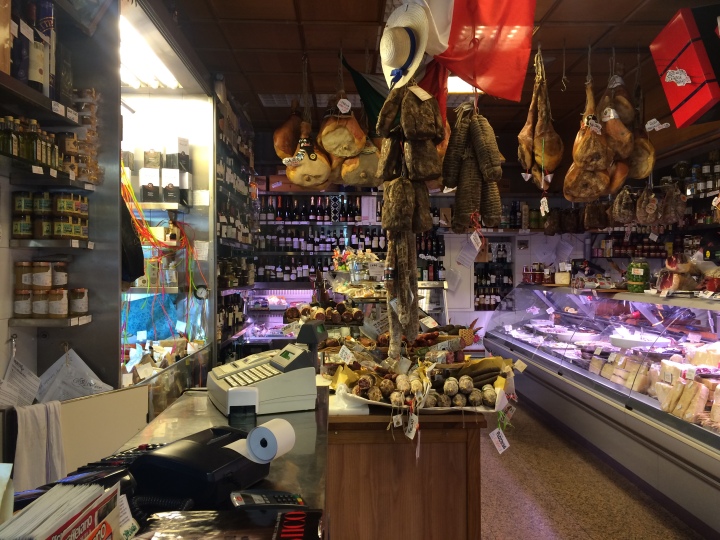 You can smell Volpetti before you see it. Although strewn with salami and stacked with fresh bread, it is the aroma of Volpetti’s cheeses that washes over you when you walk through the door. The shop also stocks pizzas, olives, and a fine selection of chocolates and other confections.

Part of what I love about Volpetti, other than the fact that in one shop it houses nearly all the items necessary to put together a simple meal, is that a shopkeeper escorts you through each section, making suggestions, giving samples, and slicing, weighing, and wrapping up your items for you.

We picked out a basket of fresh fettuccine (which we later paired with spinach and bottled marinara sauce from the corner bodega to make dinner) and a small selection of cheeses: Fresh ricotta – to top the pasta, peppercorn chèvre, and – my favorite – scamorza di fattoria (a sliceable semisoft cheese reminiscent of mozzarella). For lunch, we picked out slices of two different tortas (pie-shaped pastries stuffed with savory fillings). Tortas are a brilliant idea because they can be eaten on the run, are convenient to keep in the fridge and nibble on for breakfast, and are often filled with vegetables. We chose one stuffed with cheese and broccoli and one with cheese and bieda (a vegetable nobody in the store nor google could translate into English but that we later guessed was chard).

After putting away our groceries, we observed the Italian ritual of taking a prolonged lunch. I had thought that my adrenaline would be enough to power through the afternoons in Rome in July, but it turns out that Italians know what they’re doing by staying home between the hours of roughly 1-3. We’ve been breaking up our days by visiting the city in the morning and then again from the late afternoon into the evening, and it has been working out great.

Besides, the city really is loveliest during the magic hour before sunset (roughly 7:30 – 8:30 here, these days). Case in point: We made it to the Forum around 5pm. After wandering around the ruins and scoping out the line for the Colosseum (which was horrible – book your tickets ahead of time online), we made our way over to Palatine Hill. The sun dipping away cast the view over the city in a particularly rosy light.

For dinner, we skipped back over to Testaccio for pizza at Pizzeria Remo. We ordered baked greens, and they served us a plate of chicory, bathed in olive oil and sprinkled with lemon juice and coarse sea salt. The pizza – with a tissue thin crust – was still bubbling when the waiter slapped it on the table. I think we will have to return.

Today we visited the Sistine Chapel and tomorrow we plan to visit the historic city center. More on all that soon…Hope you have a great week! 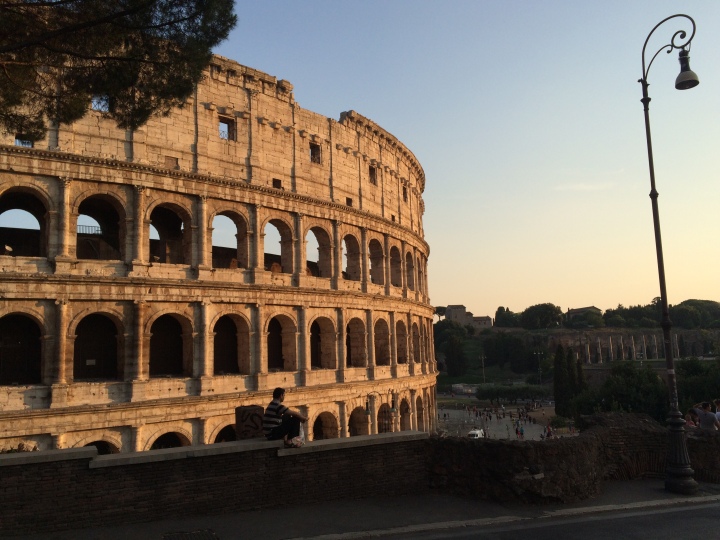