Yesterday we took the bus to Centro Storico. Our first stop was Antico Forno Urbani, a bakery that has been owned and operated by the same family since 1927. As with Volpetti, we smelled Antico Forno Urbani from around the corner. Rather than cheeses making their presence known, however (as was true at Volpetti), at Antico Forno Urbani it was the scent of freshly baked bread. And buttery cookies. And sugar sprinkled doughnuts. We took a number and, when it was our turn, filled a little paper bag with a doughnut, a cornetto, and (the shopkeeper’s favorite) a cherry-filled cookie. All of which were delicious. 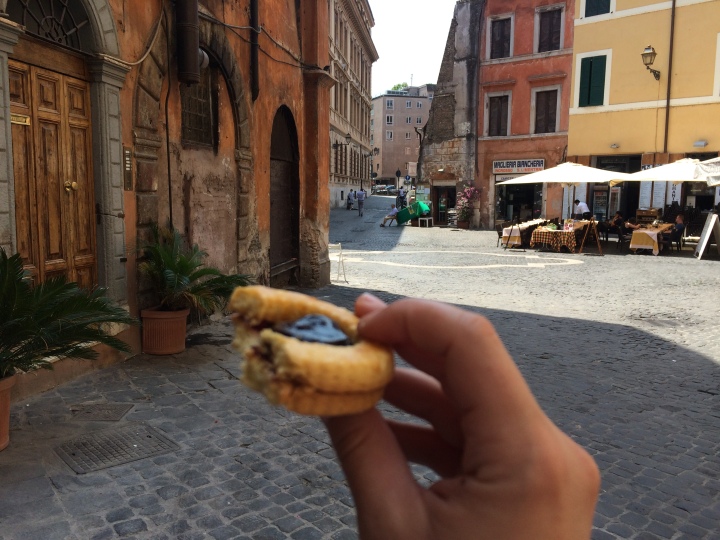 Then we wandered through the neighborhood’s narrow alleyways. Antico Forno Urbani is located in Rome’s Jewish Ghetto, and in front of many of the apartment buildings in the neighborhood are plaques with the names of the residents who were taken from their homes and killed by the Nazis. It is a concrete reminder of a chilling past. Standing in front of the residents’ homes, in the midst of the bustle of the neighborhood, the history shifts from being about numbers to being about people – people whose stoops you can stand on and look out from. From this perspective, the injustice of being taken from one’s home (a place that is supposed to be safe) becomes even more immediate. 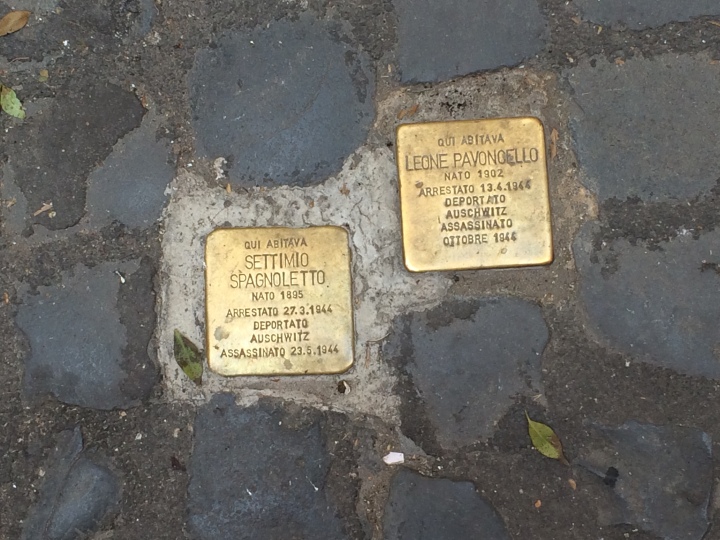 Other, more positive, vestiges of the neighborhood’s past remain as well; the streets are lined with kosher delis featuring Jewish Roman specialties, such as fried artichoke. Tucked in the alleyways are also art galleries and around corners are tranquil piazzas. 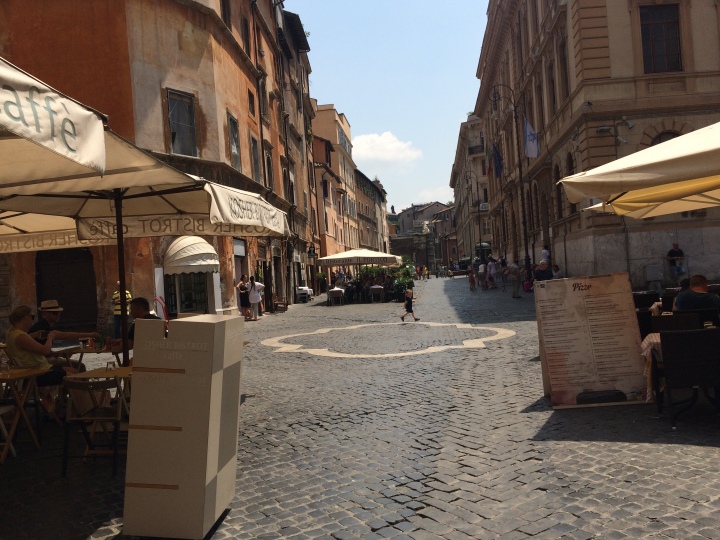 For lunch, we stopped by Roscioli, famed for it’s pizza al taglio (pizza by the slice). You indicate how much of the long, focaccia-like rectangle you’d like, and the shopkeeper hacks of the slice with a butcher knife and hands it to you on a wooden pallet. I was surprised by the number of business men in suits balancing on stools while grabbing a quick bite. And, we discovered the second best named pastry thus far on the trip: Brutti ma Buoni – a sort of hazelnut meringue, whose name translates to ‘ugly but good’ (true). 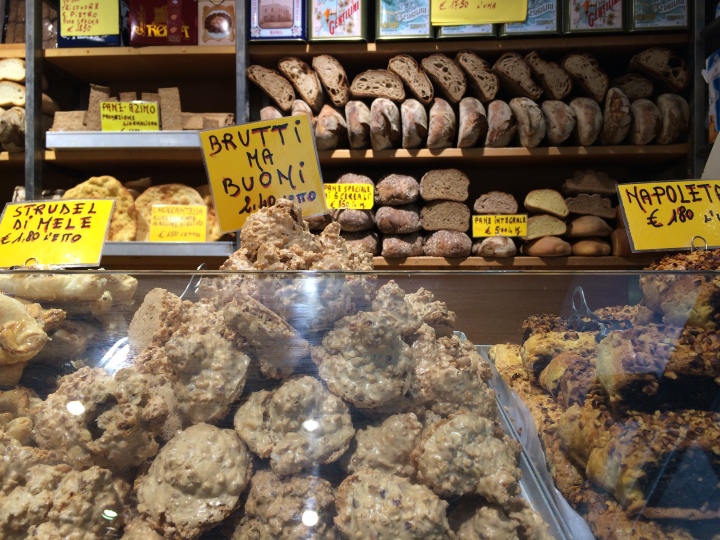 After a brief stop to fawn over the pretty pastel Piazza Navona, we headed to the Pantheon. I was impressed by just how imposing the space is. Sitting in the pews under the oculus, with the sun beaming through, I noted that it is no wonder the space has inspired spiritual reflections for thousands of years and architectural design for hundreds.

We ducked into a nearby church to peek at a Michelangelo sculpture and then sampled some gelato (more on that soon…).

Monday we visited Vatican City. Mostly, I wanted to see the frescoes in the Sistine Chapel. If you are considering visiting the Sistine Chapel, nota bene: 1) The line to get into the Vatican Museum is ridiculous. We knew this in theory, but decided to brave it anyway. Let me put it to you this way: 25,000 people visit the Vatican Museum, on average, per day. Many of those people are waiting in line. Do yourself a favor and buy a ticket online (and maybe do it a day or two before visiting, because the online tickets sell out). There were literally no people waiting in the line for people who had previously purchased an online ticket (we sailed through by showing the guard confirmation on our phone). 2) The Sistine Chapel is at the very end of the museum. Even if you only want to see the chapel, you have to make your way through almost every other gallery to get there (Ikea-style). Many of these galleries are awesome. But, they are also crammed with people. Sometimes we felt like we were a part of a herd of cattle, moving very slowly through hallway after hallway. 3) To enter the chapel, you must be conservatively dressed (e.g. shoulders and knees covered). I achieved this by wearing jeans and a button down shirt. Other women achieved this by wrapping a light scarf over their shorts. These women are smarter than I am.

Nonetheless, seeing the Sistine Chapel was well worth it. Standing under the ceiling panels, it became clear why Michelangelo is lauded as a master. His sense of perspective was so accurate that the legs of one of his figures appeared to be dangling out of the ceiling.

No pictures were allowed in the chapel, as it is a holy space, so unfortunately I have no pictures to share with you. Instead, I will leave you with an image of St. Peter’s Basilica, which I found equally beautiful.

Tomorrow we leave for Vienna! Any tips for what to see or do?